PSiO blue light in a wavelength of 470nm is used during morning hours to energize, waking up, and stimulation 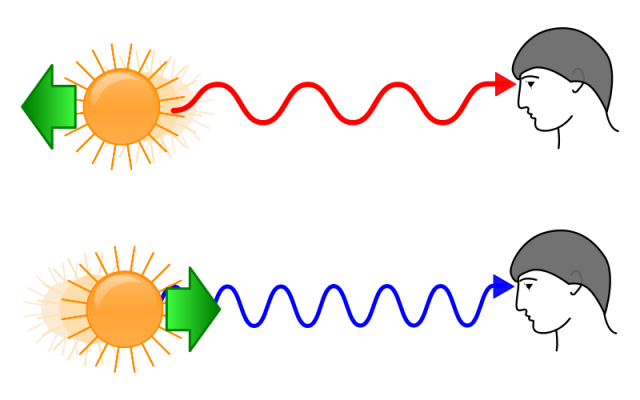 PSiO red light in a wavelength of 625nm is mostly used in evening programs, especially those meant for sleep and relaxation

In nature when any biological system lives outdoors in the morning it is exposed to excessive blue light and in the evening to excessive red light.

Why is that so?

Scientists measure whether is the universe expanding or gathering according to whether the Sun is approaching or distancing in a way to measure the shift of spectrum in blue or in red.

In the morning Sun comes to the observer, wherever he is on earth, and the spectrum shift to blue; blue light excess. In the afternoon Sun moves away from the observer and the shift is in red; red light excess.

This color cycle determines cycles of biochemical processes in the body, ie cycles of hormones and neurotransmitters, which in the context of PSiO technology is particularly important because of the regulation of melatonin (a hormone essential for good sleep) – such as insomnia and serotonin (a neurotransmitter important for creating and maintaining a good mood) – as prevention of seasonal depression.

A blueshift is any decrease in wavelength (increase in energy), with a corresponding increase in frequency, of an electromagnetic wave; the opposite effect is referred to as redshift. In visible light, this shifts the color from the red end of the spectrum to the blue end. Doppler blueshift is caused by the movement of a source towards the observer. The term applies to any decrease in wavelength and increase in frequency caused by relative motion, even outside the visible spectrum. Only objects moving at near-relativistic speeds toward the observer are noticeably bluer to the naked eye, but the wavelength of any reflected or emitted photon or other particle is shortened in the direction of travel.

PSIO blue light at 470nm wavelength is mostly used in morning energizing and stimulation programs because it has the ability to inhibit melatonin.

Research can be viewed here: https://www.psio.com/en/research-melatonin.html

Neither the emitted nor perceived light is necessarily red; instead, the term refers to the human perception of longer wavelengths as red, which is at the section of the visible spectrum with the longest wavelengths. The cosmic redshift reflects the general expansion of the universe (Hubble’s law).

There are three main causes of redshifts in astronomy and cosmology:

Objects move apart (or closer together) in space. This is an example of the Doppler effect.

The PSIO red light in the wavelength of 625nm is mostly used in evening programs, especially those designed for sleep and relaxation.

Research can be viewed here: https://www.psio.com/en/research-LLLT.html

You can check the research and effects of green light here: https://www.psio.com/en/research-green-light-study.html

For more information and free treatment please contact Conny – your PSIO Ambassador at: